What are the Benefits?

Pull-off testing of a coating is a destructive test. And because the coating is tested to destruction a test cannot be repeated (unlike e.g. measuring the dimensions of an object, which can be done repeatedly).

A pull-off test result cannot therefore be accurately checked, only compared with a similar test done elsewhere. So with no proper method of checking your test result you must instead be able to trust your test equipment absolutely.

The most critical factor in pull-off testing is trying to stress the material evenly during testing. Even microscopic misalignment of the testing machine (which cannot be controlled by mechanical, optical or other manual means) will cause substantial unwanted stress concentrations in the tested material, resulting in premature fracture of the sample.

When choosing test equipment it would be a serious mistake to focus on a testing machine’s calibrated accuracy alone (which can be easily checked) without taking into account the machine’s ability to distribute the pull stress evenly.

Example:
Even if the actual force applied has been calibrated as accurately as you want, fracture may still occur 10%, 20% or even 80% too soon. So to record a test result of, say, 6.23 MPa with an accuracy within ± 0.001 MPa when the result should have been eg.13 MPa, is not very useful.

Test Experiment:
On one occasion, five tests done with the DFD® technology on a homogeneous material produced a repeatability (standard deviation) of less than 0.5% of the average value. The only way of achieving such repeatability is to measure at least 99.5% correctly every time; random testing errors cannot be repeated with such consistency. Most types of materials and coatings however are far from homogeneous, so a higher deviation is normally expected.

The DFD® technology will always give as low deviation as the tested material allows, not a higher figure due to misalignment or other uncontrolled factors.

The Three Stages of the Evolution of Adhesion Testing

The first generation pull-off adhesion testers had mechanical screws for adjusting the legs to achieve the alignment. The fact was that however experienced the test operator was the “alignment” was never sufficient. We now know that even microscopic misalignments (A and B) (exaggerated for illustration purposes) due to e.g. an uneven surface under the test dolly (C) or uneven glue thickness would have ruined the test. The pull force was always concentrated on one side of the specimen causing premature fracture at values far lower than the true strength. 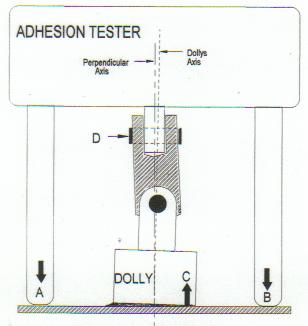 The second generation adhesion testers attempted to deal with the alignment problem by adding a universal link (D) between the test element and the pulling device. The principle could either be as illustrated on the right or other similar mechanical devices. Even though the force indeed had been balanced between the push legs (A) and (B) it had not solved the problem of test dollies which were glued on an uneven surface (again, even microscopic misalignments caused problems). The result was that the force was concentrated on one side of the test dolly and ripped off prematurely (C). 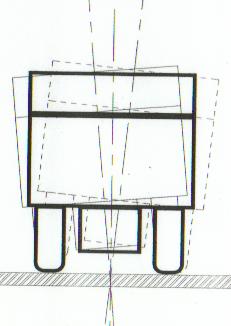 When the PAT tester was designed the question we asked was not “How to achieve a perfectly perpendicular pull direction”. Perpendicular to what? The coating could be on a pipe, a spherical surface, an uneven surface, even a flexible surface. Only one thing was certain: It was never perfectly flat! So instead the following question was asked: “How can the pull stress be distributed 100% evenly regardless of substrate shape?”

The result was the patented DFD® testing principle which is now being used world-wide.

No mechanical system can detect the microscopic changes during materials stress build-up and no other system can take the corrective actions needed to retain the perfect balance.

Animation of a PAT testing head in different positions

This site uses functional cookies and external scripts to improve your experience.

NOTE: These settings will only apply to the browser and device you are currently using.

By contacting us you consent to storing your contact information with us.